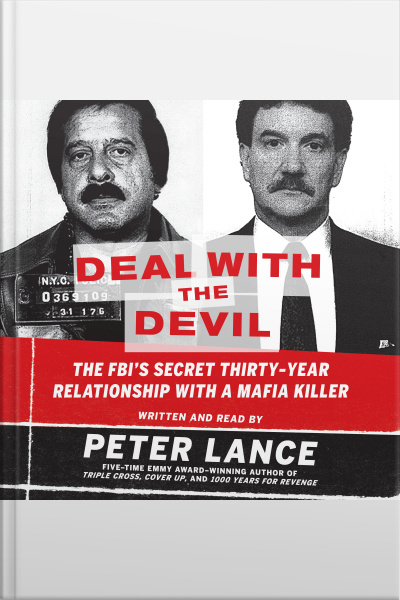 Deal with the Devil

From an award-winning investigative reporter: the shocking story of the mob killer who terrorized the streets of New York City for decades . . . while working for the FBI

A Mafia capo who "stopped counting" after fifty murders—earning nicknames including "the Grim Reaper" and "the Killing Machine"—Greg Scarpa was enlisted by the FBI as early as 1960. His detailed debriefings on Mafia practices and activities went straight to J. Edgar Hoover and revealed the structure of Cosa Nostra long before the celebrated Valachi hearings. In forty-two years of murder and racketeering, Scarpa served only thirty days in jail, thanks to his secret relationship with the Feds. But Scarpa's most deadly reign of terror came in the period from 1980 to 1992, when more than half his homicides occurred—even as Scarpa was serving as a paid informant under Supervisory Special Agent R. Lindley DeVecchio, who ran two organized crime squads in the FBI's New York Office.

The celebrated case agent on the 1985–1986 Mafia Commission prosecution, DeVecchio had persuaded Scarpa to return to the fold as an informant, under laws that explicitly forbid organized crime insiders from committing murder or other crimes while receiving compensation from the Bureau. And yet, drawing on secret memos that went to every FBI director from Hoover to Louis Freeh, Lance documents that Scarpa not only continued his violent rampage during these years, but actually launched a new war for control of the Colombo crime family—a conflict that left fourteen dead and dozens injured.

Before he died of AIDS, contracted through a tainted blood transfusion, Scarpa committed or ordered twenty-six murders—including the violent rubout of his own brother Sal in 1987 and the drive-by slaying of his nephew Gus Farace, which triggered a five-hundred-agent manhunt—all while serving as an informant for Lin DeVecchio. When DeVecchio himself was indicted on four counts of murder in 2007, Brooklyn DA Charles Hynes called the case "the most stunning example of official corruption . . . I have ever seen." Yet the murder charges against DeVecchio were dismissed a short time later—even as a New York State Supreme Court judge described the FBI's association with Scarpa as a "deal with the devil."

After the case's abrupt dismissal, Lance started peeling back the layers on what defense attorneys called Scarpa's "unholy alliance" with the FBI. Through exclusive interviews with Scarpa's son Greg Jr. and former Lucchese boss Anthony "Gaspipe" Casso, among others, as well as more than 1,150 pages of confidential briefing memos, many revealed here for the first time, Lance traces links between the Scarpa case, the infamous Mafia Cops case, and more.

Written with the same astounding capacity for penetrating criminal networks that marked Lance's previous books, Deal with the Devil is a page-turning work of investigative journalism that reads like a Scorsese film.