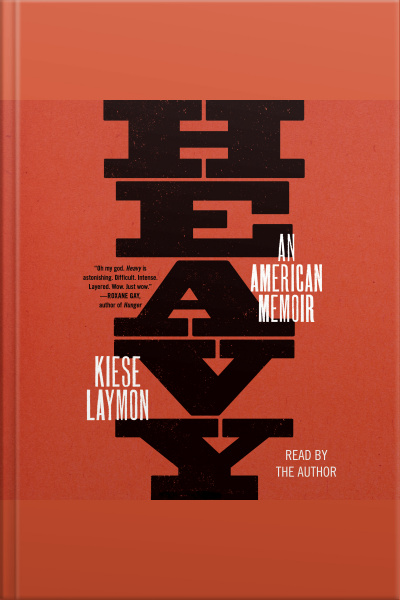 In this powerful and provocative memoir, genre-bending essayist and novelist Kiese Laymon explores what the weight of a lifetime of secrets, lies, and deception does to a black body, a black family, and a nation teetering on the brink of moral collapse.

Kiese Laymon is a fearless writer. In his essays, personal stories combine with piercing intellect to reflect both on the state of American society and on his experiences with abuse, which conjure conflicted feelings of shame, joy, confusion, and humiliation. Laymon invites us to consider the consequences of growing up in a nation wholly obsessed with progress yet wholly disinterested in the messy work of reckoning with where we’ve been.

In Heavy, Laymon writes eloquently and honestly about growing up a hard-headed black son to a complicated and brilliant black mother in Jackson, Mississippi. From his early experiences of sexual violence, to his suspension from college, to his trek to New York as a young college professor, Laymon charts his complex relationship with his mother, grandmother, anorexia, obesity, sex, writing, and ultimately gambling. By attempting to name secrets and lies he and his mother spent a lifetime avoiding, Laymon asks himself, his mother, his nation, and us to confront the terrifying possibility that few in this nation actually know how to responsibly love, and even fewer want to live under the weight of actually becoming free.

A personal narrative that illuminates national failures, Heavy is defiant yet vulnerable, an insightful, often comical exploration of weight, identity, art, friendship, and family that begins with a confusing childhood—and continues through twenty-five years of haunting implosions and long reverberations.

Topics and Questions for Discussion

1. At the beginning of Heavy, Laymon writes that he “wanted to write a lie” but “wrote this to [his mother] instead” (page 10). Does his assertion that he’s writing to his mother shift your understanding of the memoir? Have you ever told a kind lie to a parent instead of telling the truth?

2. Why does Laymon run away from Beulah Beauford’s house? Why does his mother want him to return there?

3. When Laymon and his Grandmama go to the Mumford’s house, he feels a “rot spreading in his chest” (page 52) while he waits in her car. What causes these feelings, and how are they connected to larger social problems?

4. Laymon writes that, by eighth grade, and even before meeting “actual white folk,” he’d met the white protagonists of many, many TV shows, movies, and books, as well as in the rest of pop and contemporary culture—politicians, the coaches of sports teams, representations of Jesus and Mary, etc. “That meant,” he writes, “we knew white folk. That meant white folk did not know us” (page 72). What does he mean by this? What are some of the ramifications of this not knowing?

5. One of Laymon’s favorite words growing up is “meager.” How does he use it, and what does it mean to him?

6. For his final paper for Coach Schitzler’s English class, Laymon incorporates a reference to Assata Shakur. Coach Schitzler responds by telling him that the paper is a “mess of faulty logic” (page 110) and gives him a C. How does Laymon’s growing political awareness, and experience of institutional racism, shape his senior year of high school?

7. At Millsaps, Laymon realizes that “books couldn’t save [him] from a college, classes, a library, dorms, and a cafeteria that belonged to wealthy white folk” (page 126). In what specific ways is Laymon excluded, punished, and ostracized on campus because he’s black? How is this tied to his weight?

8. How does Laymon feel about Malachi Hunter, his mother’s boyfriend? How does their relationship test his connection to his mother?

9. After Laymon writes an essay for the school paper on institutional racism, and is threatened in letters and then in person by white fraternity members, Nzola tells him he hasn’t said anything about “‘patriarchy’ or ‘sexism’ or ‘intersectionality’” (page 151) recently. In what ways are their lived experience of racism and patriarchy different?

10. Laymon is expelled from Millsaps because he took a copy of The Red Badge of Courage out of the library without checking it out. Eventually, he transfers to Oberlin; he promises his mother he will come back to Mississippi soon, but he does not come back soon. Why not?

11. Laymon writes that, despite all the weight he’d lost, “whenever [he] looked at [himself] in the mirror, [he] still saw a 319-pound fat black boy from Jackson” (page 178). How is his self-image affected by his family? By the world around him? By his experiences of sexual abuse?

12. On September 15, 2001, Laymon takes a commuter train to New York City to volunteer at Ground Zero. A dark-skinned South Asian family is seated in front of him, and both white and black men on the train make comments about terrorism. Laymon defends the family, then wonders if “this feeling [he] had was what ‘good white folk’ felt when we thanked them for not being as terrible as they could be” (page 183). Can you describe what that feeling might be? Do you think you’ve ever had that feeling?

13. On a college judicial board, Laymon hears the case of a “small, smart white boy” (page 193) found with cocaine, who tells the committee a black man forced him to buy it. The small, smart white boy is found not responsible for distributing drugs. How does power and privilege play into this situation?

14. After seeing his father, Laymon writes that he’d “never given much weight to the idea of present black fathers saving black boys” (page 200). What do you think he means by this?

15. Laymon sees his mother at a casino and does not say hello to her. Why not?

1. Read Laymon’s novel, Long Division, or his collection of essays, How to Slowly Kill Yourself and Others in America.

3. For more information on Kiese Laymon and Heavy, visit https://www.kieselaymon.com.