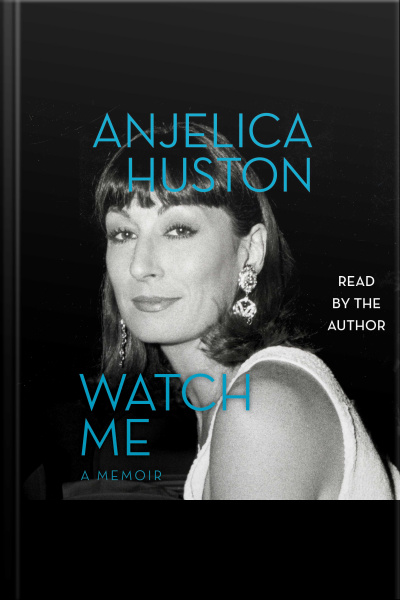 Watch Me: A Memoir

Academy Award-winning actress Huston’s “tireless fascination with the world is thrilling…” (Elle), and Watch Me is an “elegant and entertaining” (Chicago Tribune) account of her seventeen-year love affair with Jack Nicholson, her rise to stardom, and her mastery of the craft of acting.

Picking up where her first memoir A Story Lately Told leaves off, Watch Me is a chronicle of Anjelica Huston’s glamorous and eventful Hollywood years. “With a conversational intimacy, inhabiting the role of the new best friend” (San Francisco Chronicle), she writes about falling in love with Jack Nicholson and her adventurous, turbulent, high-profile, spirited relationship with him and his intoxicating circle of friends. She writes about learning how to act; about her Academy Award-winning portrayal of Maerose Prizzi in Prizzi’s Honor; about her collaborations with many of the greatest directors in Hollywood, including Woody Allen, Wes Anderson, Richard Condon, Bob Rafelson, Mike Nichols, and Stephen Frears. She movingly and beautifully describes the death of her father John Huston and her marriage to sculptor Robert Graham. She is candid, mischievous, warm, passionate, funny, and a fabulous storyteller. Watch Me is a magnificent memoir “from a lady so simultaneously real, tough, vulnerable, privileged and candid, I want to hear whatever she tells me” (Lisa Schwarzbaum, The New York Times Book Review).