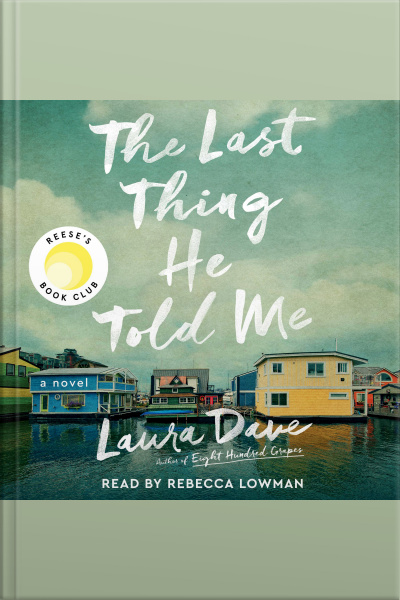 The Last Thing He Told Me: A Novel

This reading group guide for The Last Thing He Told Me includes an introduction, discussion questions, ideas for enhancing your book club, and a Q&A with author Laura Dave. The suggested questions are intended to help your reading group find new and interesting angles and topics for your discussion. We hope that these ideas will enrich your conversation and increase your enjoyment of the book.

From internationally bestselling author Laura Dave comes a riveting new suspense novel about a woman’s search for the truth about her husband’s disappearance—no matter the cost.

Before Owen Michaels disappears, he smuggles a note to his beloved wife of one year: Protect her. Despite her confusion and fear, Hannah Hall knows exactly to whom the note refers—Owen’s sixteen-year-old daughter, Bailey. Bailey, who lost her mother tragically as a child. Bailey, who wants absolutely nothing to do with her new stepmother.

As Hannah’s increasingly desperate calls to Owen go unanswered, as the FBI arrests Owen’s boss, as a U.S. marshal and federal agents arrive at her Sausalito home unannounced, Hannah quickly realizes her husband isn’t who he said he was. And that Bailey just may hold the key to figuring out Owen’s true identity—and why he really disappeared.

Hannah and Bailey set out to discover the truth. But as they start putting together the pieces of Owen’s past, they soon realize they’re also building a new future—one neither of them could have anticipated.

With its breakneck pacing, dizzying plot twists, and evocative family drama, The Last Thing He Told Me is a riveting mystery, certain to shock you with its final, heartbreaking turn.

2. Consider the choice of narrator. How does the narrator shape our understanding of the contours of this story? How might the book be different if the narration switched off between Bailey and Hannah? Or even added in chapters from Owen?

4. Discuss the message that Owen sends to Hannah before he disappears. What does Owen mean by “Protect her”? How does Hannah interpret Owen’s request? How would a different message have changed Owen’s intent and Hannah’s actions?

5. We learn early on that Hannah’s mother left her when she was young. How is this similar to and different from the absence of Bailey’s mother? How does it compare to the way Owen leaves Hannah and Bailey?

6. When Hannah picks Bailey up from school the day Owen disappears, Bailey comes out with “a needy look on her face that I don’t recognize.” (22) This is the first of the small but pivotal moments that transform Hannah and Bailey’s relationship. What are some of the other small moments in which they rely on each other?

7. Owen’s note to Bailey says, “You know what matters about me.” (23) What do you think this means? What would you hope that your loved ones would say are the things that matter about you?

8. Early on, Hannah compares Owen’s departure to that of her father leaving her mother: “Doesn’t that make me the same as her? Both of us putting our faith in someone else above everything else—calling it love. What good is love, if this is where it leads you?” (45) At another point, she realizes that her belief in Owen will show her to be either a “steadfast partner or a complete fool.” (143) Discuss the relationship between faith and love, trust and foolishness.

9. In Austin, Hannah tells Bailey that she’s trying to protect her, to which Bailey responds, “But you can’t. That’s the thing. No one can protect me from this. So how about you agree to be the person who tells me the truth?” (112) What’s the relationship between the truth and protecting those we love? Can we do both, or are they mutually exclusive?

10. Hannah realizes that Owen isn’t running for just any reason, but that “he’s running from something he’s terrified of.” (150) Did you have any theories about what Owen was running from, and did the real answer surprise you? What are some things that might make you drop everything and run the same way Owen did?

11. Grady tries to impress upon Hannah the reality of transitioning into WITSEC, outlining what she and Bailey would need to leave behind to start their new lives. Imagine what that might be like for you and your family. What names would you choose? What jobs, hobbies, or identifying activities would you have to give up? How would you make a life for yourself?

12. How would you feel if you were asked to take care of someone else’s child? In what circumstances might you say yes, or no? Owen placed immense trust in Hannah’s making a specific decision—was it, ultimately, warranted? Was it fair to even ask her?

1. Toward the end of the book, Hannah thinks, “This is the thing about good and evil. They aren’t so far apart—and they often start from the same valiant place of wanting something to be different.” (266) As a group, discuss. Do you agree or disagree? Can you think of any historical examples of good and evil being closer than we would think?

2. At one point, Jules chooses to say “be careful” instead of “I love you,” and Hannah realizes that under the circumstances, they mean essentially the same thing. (240) What other phrases can you think of that can mean the same thing as “I love you”? How do we communicate love in our daily lives through words and deeds? Make a list on your own, and then share the answers with your book club.

3. Since Austin plays such a big part in the book, consider “traveling” to Austin virtually by taking a cooking class, watching a live show, or ordering local coffee or wine to enjoy at book club (https://www.austintexas.org/visit-austin-from-home/).

4. Visit Laura Dave’s website at http://www.lauradave.com to learn more about her and her other works.

A Conversation with Laura Dave [[10–12 Questions]]

Q: Congratulations on publishing The Last Thing He Told Me! I’m hoping you can tell me more about the book’s origins. Why were you interested in telling this story? You’ve said in the past there’s usually a question that begins each of your books—what was the question guiding this one?

Thank you! I’m so excited for The Last Thing He Told Me to find its way into the world, and really hope it brings readers all kinds of enjoyment. In terms of the novel’s origin, I’ve always been fascinated by true crime, particularly cases that involve fraud and embezzlement. In the early 2000s, I was intrigued by the financial scandal at Enron. I remember watching Linda Lay [wife of Enron’s CEO, Kenneth Lay] give an interview proclaiming that her husband did nothing wrong. I started to imagine, then, the story of a woman who felt certain of her husband’s innocence despite mounting evidence to the contrary. I didn’t put pen to paper for The Last Thing He Told Me, though, until almost a decade later when I came to the question I wanted to explore in writing this novel. I wanted to think about what it is to know the people closest to us. To know the people we love the most. As I delved deeper into the novel, this exploration also led to questions of identity: What makes someone who he is? Is it the details he or she shares with you? The biographical checklist—I grew up here, I went to this school, I do this for work. . . . ? I believe it is something deeper, something more soulful, that makes us who we are. And I wanted to dig into the idea that we can be knowable to the people we love—that they can be knowable to us—despite any details that shift or alter along the way.

Q: What was your writing process for this book? Did it differ at all from the process of writing your previous books?

For each of my novels, The Last Thing He Told Me included, I don’t write with an outline or any involved beat sheet. This means that writing for me is a process of rewriting. I utilize the first draft to find the characters and plumb the questions I want them to grapple with. The next draft is where I begin to solidify theme and motivations. It’s usually somewhere around draft eighteen—I wish that were an exaggeration—that I find my way to the ending. Because The Last Thing He Told Me involves such intricate plotting, this process of writing and rewriting was even more involved than my other novels. And when I found my way to the heart of the story (and its ending), it was so rewarding.

Q: The Last Thing He Told Me is set in the small, tony community of Sausalito. What did Sausalito—and the adjacent tech world—contribute to the story you wanted to tell?

I like to write about towns and communities that are off the beaten path in some way—which is how I found my way to Montauk [The Divorce Party], western Massachusetts [The First Husband], and, for The Last Thing He Told Me, the floating home community in Sausalito, California. Communities on the edge of the world demand different things of their inhabitants and I like exploring the way those dynamics play into a character’s ultimate journey.

The tech world plays into the novel in a different way. It’s a world that has such a huge impact on our culture in ways we aren’t even aware of. I liked the idea that Owen’s work, which was on the cusp of being groundbreaking for the larger world, was having a personal impact for him in an entirely different way.

Q: A large factor in Hannah’s final decision in the novel is that she wants Bailey to be able to be herself, free of outside influence or the need to hide. We see Bailey through Hannah’s eyes as a fully formed individual—someone who’s strong willed, kind, and devoted, with very particular interests. What do you think our teenage selves reveal about our futures? Why is it essential to Hannah that she protect Bailey’s burgeoning sense of self?

There is something raw and wild about your teenage years. And I imagined Bailey to be the kind of teenager who is embracing all of herself in the face of all that change. She knows what she’s interested in, whom she is interested in spending time with, and where she hopes her future will take her.

I have so much affection for Bailey. I wanted her to have a limitless future and probably infused that desire into Hannah’s decisions for their family. At the end of the day, whatever has been lost, these two will have each other—which feels like a unique type of happy ending.

Q: The novel’s central relationship is between Bailey and Hannah. What starts as a forced stepparent/stepchild relationship...